Wanting to look up an old newspaper article from my younger years, I tried a free 7-day subscription to Newspapers.com. Not only did I find the particular article I sought, I dug a little further and found the earliest days of my career as a creative talent.

During the mid-1990’s I studied photography and journalism in Iowa at Muscatine Community College. During the last year of my studies, I began to write and shoot on a freelance basis for the Muscatine Journal, and the Quad-City Times.

On December 13, 1996, my first photo as a professional (paid) photojournalist was published in the Muscatine Journal. As you can see, it wasn’t anything super spectacular, but it paid. A rear 3/4 view 35mm black and white photograph of the “then” new ambulance for Wapello, Iowa plus the short news story I had also written on the matter earned me my first payday as a professional journalist and photographer.

Thanks to the free seven-day trial from Newspapers.com I found something I thought was lost forever in the various moves of adult life. As such, I was able to thoroughly enjoy rediscovering the roots of my career as freelance talent and add a memento here in the professional memoirs and portfolio. 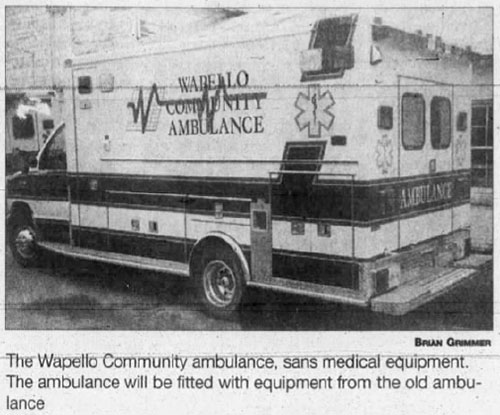